The Butler, The Baker and their Bounty; (One's Boom, the Other's Doom)

I have been studying the life of Joseph for a while and the story of two men he had an encounter with in his sojourn in prison has been on my study radar. Both of them were key employees of King Pharaoh of Egypt and for whatever reasons, they both committed an offence that landed them in prison. The King was upset with them and in spite of the position they occupied; being the very ones who fed him with drinks and food, they were remanded in jail.

It came to pass after these things that the butler and the baker of the king of Egypt offended their lord, the king of Egypt. 2And Pharaoh was angry with his two officers, the chief butler and the chief baker. 3 So he put them in custody in the house of the captain of the guard, in the prison, the place where Joseph was confined. 4 And the captain of the guard charged Joseph with them, and he served them; so they were in custody for a while. (Genesis 40:1-3)

Evil communication as we know, corrupts good manners. I wonder how severe the offence was, that got the king so infuriated. Something tells me that someone must have influenced the other out of the two. Sometimes we get into the position of authority and we allow unnecessary influence of friends to affect our work and relationships. In life, we may have a lot of similarities with someone, but we must never forget we are different. More often than not, because we find ourselves in the same circumstances with some people, we assume that what works for them, will work with us and vice versa. What works for a member of a family may not work for other siblings- God designed it so- our peculiarity. It's time to drop your crowd consciousness and find a path to your destiny for yourself! 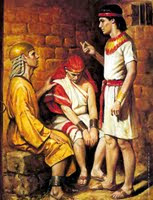 5Then the butler and the baker of the king of Egypt, who were confined in the prison, had a dream, both of them, each man’s dream in one night and each man’s dream with its own interpretation. 6And Joseph came in to them in the morning and looked at them, and saw that they were sad. 7So he asked Pharaoh’s officers who were with him in the custody of his lord’s house, saying, “Why do you look so sad today?”8And they said to him, “We each have had a dream, and there is no interpreter of it.” (Genesis 40:5-8)

So they both occupied enviable positions in Pharaoh’s house, they both offended Pharaoh the same day ,it happened that the two of them were cast into the same prison and they both had a mind boggling dream the same day! I think sometimes we are drawn to some people because we have seen similar characteristics that we possess in them. Opposite they say attracts but sometimes, similarities make us gravitate to some people too. We must however make it a point of duty to influence positively and not be influenced negatively.

9Then the chief butler told his dream to Joseph, and said to him, “Behold, in my dream a vine was before me, 10and in the vine were three branches; it was as though it budded, its blossoms shot forth, and its clusters brought forth ripe grapes.11Then Pharaoh’s cup was in my hand; and I took the grapes and pressed them into Pharaoh’s cup, and placed the cup in Pharaoh’s hand.”
12And Joseph said to him, “This is the interpretation of it: The three branches are three days. 13Now within three days Pharaoh will lift up your head and restore you to your place, and you will put Pharaoh’s cup in his hand according to the former manner, when you were his butler.
16 When the chief baker saw that the interpretation was good, he said to Joseph, “I also was in my dream, and there were three white baskets on my head. (Genesis 40:9-16)

It doesn't matter the affinity, closeness and comparability we have with our friends, spouse, fellow employees or whoever; we must be very much aware that our dreams, interpretation and pursuits in life will always be different. Our purpose and destinies are never the same. God determines what each person will become even before they are conceived. Abraham’s life was different from that of His son Isaac and Jacob followed an entirely different path from his predecessors, yet they all were prosperous. Jacob had twelve (12) sons who had different character and personalities. Throughout the Bible, God chose many prophets but each had a peculiar style and approach. The chief baker thought because the chief butler had a good interpretation of his dream, his was going to be a good one too, but events showed he got it all wrong. You can’t blame him; he was used to having things span out like that with his friend, but in this instance  it was a matter of what destiny had in store for each of them.

Even if they had shared things in common, done things together, it didn’t automatically mean their destinies would take the same bend and have the same good end. Many people envy their siblings, neighbours, co-workers and would give anything to achieve what others have achieved, forgetting that only One person determines the destiny, path, purpose of every human being, each one having a part to play as well.

17 In the uppermost basket were all kinds of baked goods for Pharaoh, and the birds ate them out of the basket on my head.”18So Joseph answered and said, “This is the interpretation of it: The three baskets are three days. 19 Within three days Pharaoh will lift off your head from you and hang you on a tree; and the birds will eat your flesh from you.” (Genesis 40:17-19)

Alas, He got an interpretation of his dream and it was a death verdict. Like I earlier pointed out, he had been doing things with his friend the chief butler: They had been saving together, travelling together, their families were best of friends and probably had been “rebelling” against Pharaoh together, but little did he realize that even though God had orchestrated their destinies, His friend the chief butler had been “diplomatic” and tactful in his relationship with the King. Pharaoh wouldn't have spared the butler’s life just because he was good looking. Most likely, he wouldn't have remanded them both to prison because the butler spilled the drink whilst serving him and the baker didn't put adequate seasoning in his food. They were both “chief" butler and baker respectively- meaning they had many working under them and they were the best of the lot!

Someone may argue that since the butler was always in the face of the king, pouring drinks into his cup, there was likely to have been some iota of  favouritism in Pharaoh’s decision towards him. You may have a point but let’s not forget that much more important than drinks is food. The baker's office might have been inconspicuous but he probably played the most important role after Pharaoh’s wife- He held the key to the king’s stomach! There was however an attitude problem, beyond the obvious offence that Pharaoh had noticed in him, which led to a capital punishment of death. The King saw a reason to re-install the butler; yes he rebelled, stole, lied but he was teachable and sober and repentant each time he was apprehended or reprimanded (He was quick to admit to Pharaoh that he forgot to mention he met Joseph two years after)- a virtue the baker did not have.He might even have been innocent! What if he was framed up?

So we see the story of two men, two dreams, two interpretations, two destinies and two different endings. One boomed and the other was doomed forever.
On another note, even if they had both sinned unforgivably, they was a need for someone to be spared so that Joseph could be recommended two years later. We see Divine Providence at work! Someone's heart and good seeds, howbeit it imperfect must have spoken for him- Something made him  preferable  above the other!

more from the archives.....

Sola Adesakin
Lagos, Nigeria
My heart is overflowing with a good theme and I recite my composition concerning the King.(Psalm 45:2). Read more on the next page......

"God's Choice of the Chosen"; A glimpse of my Book